This is a POWERHOUSE of audio combat thumping, spine ripping joy directly out of my soul. If you could extract DMT from someone via sound, these would be the weaponised beats used. It's the perfect blend of industrial and all the best parts of techno that leaves no room for underestimation, no time for rest, no hope for release from the powerful grip this firestorm of a DJ dance mix that is delivered with PHO3N1X, hot on the heels of the recent Obsidian Frontline album.

(Best viewed on PC or Tablet, mobiles do not show layout correctly)

That's just PHO3NIX alone, the fact it has all of the MUTANT MTHFKR tracks on the second CD has me genuinely jumping for joy.

BL4KJ4K (John Stancil) of Seraphim System is someone I always rave about in terms of how impressed I am that he puts out so much material like a relentless machine. The Terminator has nothing on the relentless capability of this man when it comes to his musical talent.

MUTANT MTHFKR has been delivered in three instalments and only in a digital format until now. No matter how experimental Ser-Sys got with his other albums, the MUTANT releases were for those fans who wanted good, stomp heavy, dance floor industrial and they have been great releases. This special edition 2CD special of which there are only one hundred physical copies (all individually numbered) contains all of the MUTANT works; and that makes me a very happy rivet head.

So as much as he and my friends are probably sick of hearing about my love for Seraphim System having written many an Elektro Vox article on him and his self stylised 'Swagrrotech', I STILL feel like this is a name that should be on every DJ's mix and yet somehow almost never materialises during their sets. This has to change. I feel with PHO3N1X, that time is NOW.

Quick note: Elektro Vox is an ad free site that costs a lot to run and get content for. If you like our work please consider making a small donation to keep us running, or sub to our YouTube. Thank you!

A recurring theme with Seraphim system is the dog and gun logo. Whenever you see that on a release, you know you're in for some good industrial. Whenever he pulls towards more metal or something experimental he seems to do away with the dog logo to let you know it's not necessarily industrial as you'd expect. Basically whenever I see the logo, I get excited.

The first three tracks are akin to a roller coaster ride. PHO3N1X starts you off with some instant tension with a smooth build up taking your place in the seat of the ride, clenching your jaw with anticipation as you strap yourself in.

B14KM3741 feels like being pulled up the chain, clanking it's way to the pinnacle. It then teeters you on the precipice of the drop. The beat gets your heart pumping, still the anticipation builds, the atmosphere peaks and then it speeds up, the momentum pounds faster and then the subtle drop that finally sets in the adrenaline leaving you at a semi climactic edge as it eases off... Like a deceptive pre drop before finally, finally the coaster spirals downwards in the form of RUNY05H17. Sped on in a carriage made of pure bass it keeps you guessing with dips and twists in speed creating a grand opening to this album.

In H34D5H07 we have a darker, more brutal soundscape that touches on a sense of urban decay. Like a drug trip gone bad, time convolutes and the beat is heavy in your chest. Leading to P01YM0RPH, which is where the real energy and dance factor come in. It is undeniably industrial but with hints of trance, EDM, and techno delivering a rather spiritual feel; Only for it to grab you half way and rev up those ideal dance factors. In short it is a rave anthem, pure and simple.

0NUR6 with a subtle build up, the sudden drop and increase in beats takes you by surprise in to the territory of yet another rave anthem. Yet this is more akin to boss fight music in a game as it seems to get faster with each section and therefore more tense yet satisfying.

H0574G3 sounds like two machine armies going to war. A usual staple of Seraphim System is to throw in inspirations from other styles of music and the more urban side of music underlies the base of the track.

FU114U70 has a quick build up to a pulse pounding beat for carpet bombing a dance floor with. If this doest get people moving, nothing will and yet half way through the entire sound changes to a more stompy, slower tempo romp.

Again with the classic mixing of genres BL4KJ4K is known for we are treated to one hell of a heavy opening in G23C with hip-hop influence running throughout. There are some heavy drums that absolutely devastate when played at high volume and the second half of the tracks is some of the best stuff I've heard in a long time. It is intense. This has the same vocal sample as the MUTANT MTHRFKR track 'Militant' and they compliment each other very well.

Ending the album we have H1J4K which is the perfect track to round off with. Once again we are treated to a mixture of industrial beats and trance synths that is like honey for the soul leading in to another war on the dance floor scene. As a cybergoth, I'd say this is an ideal tune to industrial dance to with the way it ebbs and flows in tempo to allow for intense movement and cool down sections.

I could review each track across the MUTANT series but I would only be repeating myself with how much I genuinely love these pure industrial pieces of ear candy.

The first set of four track in the first EP is by far my favourite. This CD really is the ultimate personification of what Seraphim System is capable and I find it a real TRAVESTY that A lot of these Industrial diamonds are not played far and wide by every DJ. Yea tou may occasionally hear the Grendel remix of Riot in Progress, or the Chain Reactor remix of Firebomb but these tracks contained in the MUTANT series need no remix. They are all absolute fire and for risk of sounding unprofessional... They all fucking slap!

So please review them yourself by listening to those Bandcamp’s plug-ins. If you have ever trusted anything I say then please trust this.. You will LOVE THEM.

It's not surprising these golden nuggets have been lost amongst his extensive amount of releases until now however. 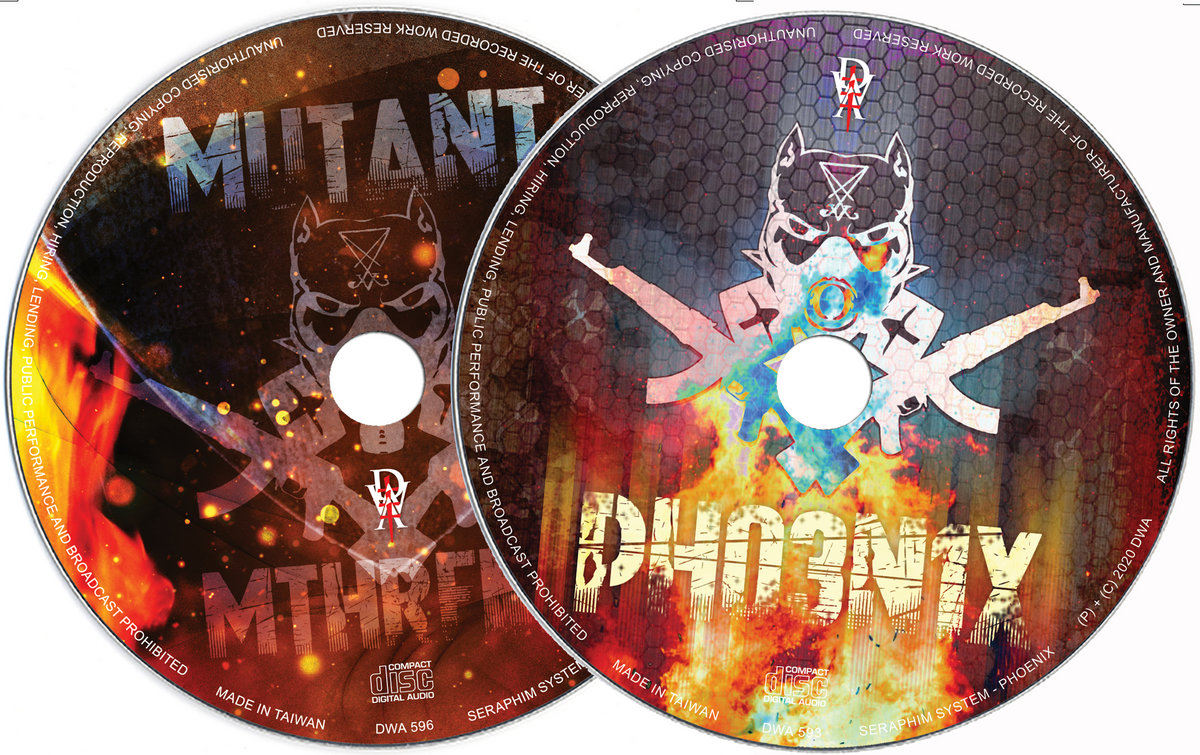 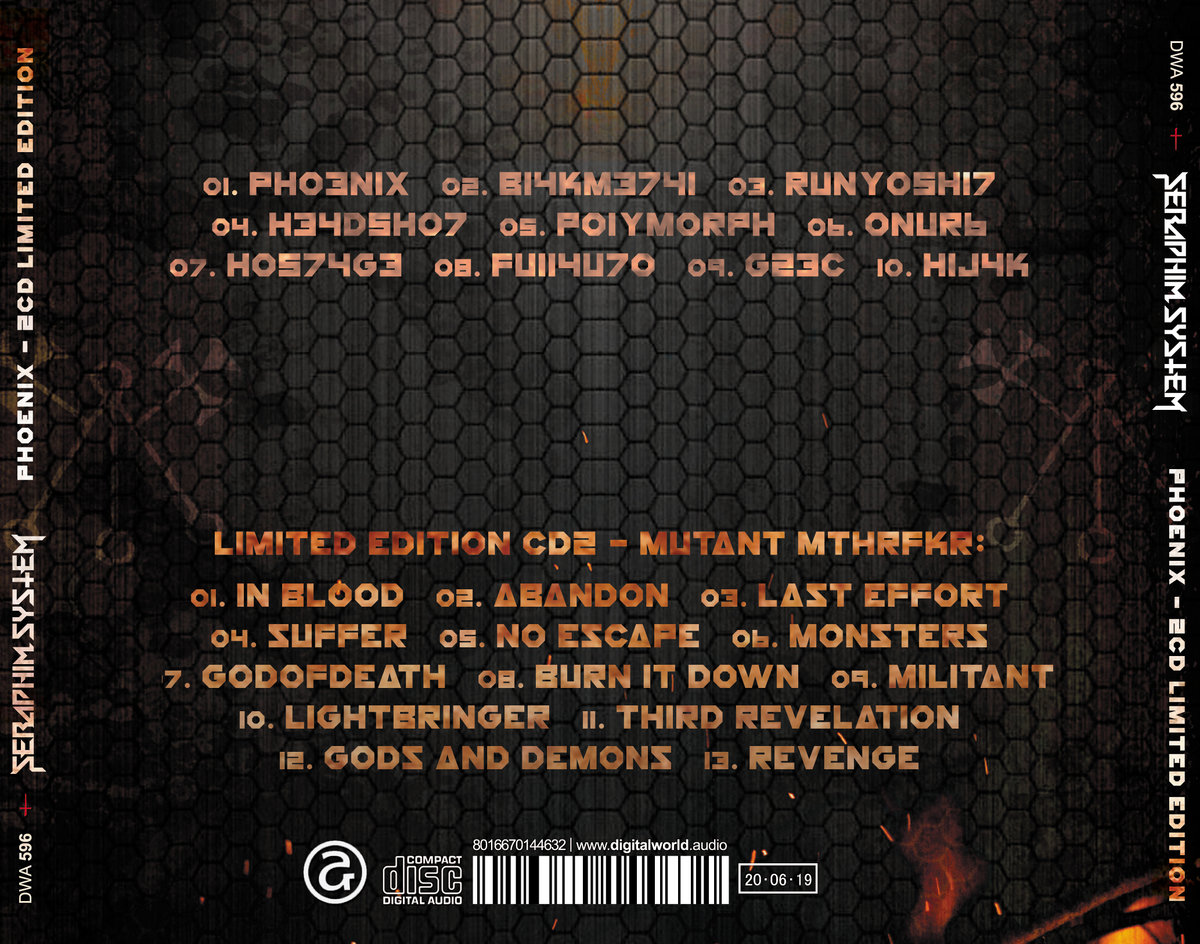 Beautifully printed art with a cardboard sleeve, great quotes in the booklet, a middle arm for the CDs, and a numbered section in the back. This album is literal fire.

For less than £10 on Bandcamp ($12) this double album is an absolute steal: Link

I very much feel that the point in this album as the title would suggest is a rise from ashes. You see he has been known to say that he didn't find success in industrial music and the like. The quotes contained within the CD booklet pertaining to never giving up and one of them being Albert Einstein..

"You never fail until you stop trying."

The very fact that the other side of the booklet contains the three MUTANT MTHRFKR designs tells me that BL4KJ4K has been through a real identity crisis with his music, having tried hip-hop most recently under the name NCRMNCR. This has the feel of a man who has put everything in to creating one last industrial album that will either make or brake him.

Whether I am right or wrong here, the emotion simply from how well the CD case etc is made to the raw talent burning throughout this album shows the pride an artist has put in to their masterpiece, the one that they will be remembered for.

John Stancil is one of the few industrial artists out there who can mix, master, and do the vocals for all of his songs whilst in his room or at work. This album is the same self doubting energy Van Gogh wrestled with played evident in this twenty first century piece of art.

Although there is a few changes mid-track that I may not personally agree with, or feel could have been amazing but fell just short of the absolute smashing drop here and there I was expecting; The fact Seraphim System can still put out track after track without recycling the same sounds and keep each piece original is nothing short of impressive.

As for the MUTANT MTHRFKR side of this offering, it truly re-lives the glory days of Seraphim System that I and others fell in love with from the likes of Automaton assisted annihilation, Deadly force, and friendly fire. It is by far my favourite industrial CD now and I am so glad that the MUTANT collection is in one place. These tracks compliments and strengthen PHO3N1X in to a truly marvellous double offering that may not have been as strong separately.

Seraphim System has put out a few masterpieces before but this, this double feature will be the one everyone knows about.

Elektro Vox is an ad free site that costs a lot to run and get content for. If you like our work please consider making a small donation to keep us running or just sub to our YouTube. Thank you!

Check out the alternative directory for E-stores, online Goth goods, and new bands to discover.